Showing posts from October, 2013
Show all

October 21, 2013
Something I’ve always found interesting about Hitchcock’s films is the way he makes sure ordinary people can picture themselves in the same fantastic adventures his heroes experience throughout the course of a film. Hitch achieved this in two major ways. The first way is he used actors we could relate to, like Jimmy Stewart. When Stewart hesitates to marry Grace Kelly in  REAR WINDOW  because he thinks they’re too different, we get it. I mean, it’s Grace Kelly—she’s the epitome of elegance and beauty. Of course an “average” guy like Stewart is intimidated. We would be, too. The second way the audience identifies with Hitchcock’s heroes is said heroes’ careers. When you have a job, you can’t help but apply your job’s skills to something else in your life. I’ll use my mom as an example. She used to be a waitress, so now whenever we eat at a restaurant, she feels obligated to gather all of our empty plates and whatnot to make it easier for whoever has to clean up the table.
Post a Comment
Continue » 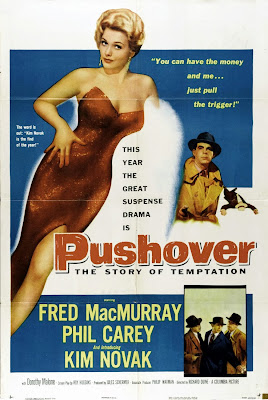 I was lucky the other day and got to have the day off from work due to miserable weather. Naturally I curled up on the couch and watched as many films as I could. I ended up viewing four films, all new to me. They were PUSHOVER , PERFECT STRANGERS , TWENTIETH CENTURY , and TIGHT SPOT . This was the first time I had ever spent a whole day just watching films I had never seen before, so I decided to sit down and write my thoughts on these films. Well, except for PERFECT STRANGERS . By the time I finished writing up everything, I remembered I had seen STRANGERS —which is telling that I had forgotten the thing entirely while remembering the other films clearly. I mainly watched STRANGERS because it starred Ginger Rogers and Dennis Morgan ten years after KITTY FOYLE , and you all know I love my Dennis like crazy. But this film was worth the two stars my TV guide gave it. You know a film’s bad when it can’t be lifted by Thelma Ritter. So here’s my opinions on the other pictures I saw, and
Post a Comment
Continue »
More posts