Showing posts from September, 2016
Show all

As much as I wanted to be scholarly while writing this piece, I soon discovered that it was pretty hard to do, strictly on a personal level. You see, talking about Rock Hudson is something I love to do, but it can be difficult to leave his personal life out of the discussion. Because I adore Hudson, I'm apt to look at him as a tragic figure, a man who wasn't able to completely live as himself and died of a horrific disease. People often like to look at his films through the lens of his homosexuality, which is perfectly fine and a worthy thing to do, but it also seems to leave something out: Rock Hudson, the actor. Can we separate Rock from his closeted image and just examine him as an actor? I think I owe it to him to try. I can't believe that his sexuality is all that we have to define him. To me, Hudson is irresistible, and nowhere is that more apparent than in his comedies, particularly those with best friend Doris Day. Known primarily for dramas such as Giant an
21 comments
Continue » 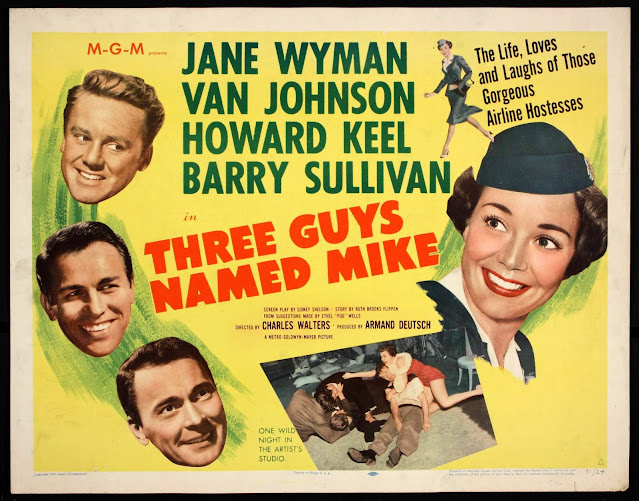 Many years ago, I was a classic film novice. It feels like a lifetime ago that I didn't know who Cary Grant was or what Citizen Kane was about, yet I can still clearly remember the small steps I took that led to my passion for old movies. One such step was Three Guys Named Mike . My oldest sister had heard that I was slowly learning about the classics and so she brought me one of those cheap collections comprised of those poor films that have been doomed to the public domain. The quality wasn't the best and the selected films were hit-and-miss, but to me, it became an education because of two films that couldn't be more different: Of Human Bondage with Bette Davis and Leslie Howard and Three Guys Named Mike . While OHB knocked me to the floor, TGNM charmed me to pieces. Its story about a young woman leaving Indiana (!) to become a stewardess and explore the world tickled me, and watching her navigate her journey with wit and grace while juggling the attentions of thr
17 comments
Continue »
More posts