Showing posts from July, 2015
Show all

Powell and Pressburger entrance with... The Tales of Hoffmann (1951) 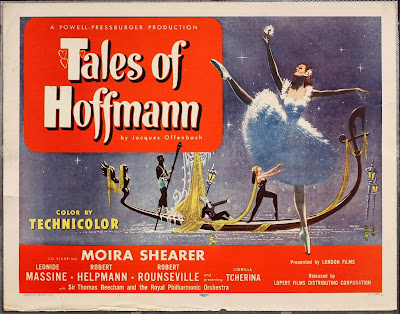 Deservedly praised for their delectable Technicolor creations and thought-provoking stories, Michael Powell and Emeric Pressburger are a film lover's dream team. Tales of obsession have never been portrayed so beautifully and so bitterly, as evidenced by the likes of The Red Shoes , Black Narcissus , A Matter of Life and Death , and more. I'm always awed by Powell and Pressburger, so when I saw the opportunity to participate in a blogathon celebrating British films, I knew I wanted to write about one of their movies. But which one? I confess that The Red Shoes is my favorite from the twosome, but for months their 1951 collaboration The Tales of Hoffmann has been sitting in my DVR, just begging for me to watch it. Like Hoffman himself, I can't deny the calling of a good story.
4 comments
Continue » 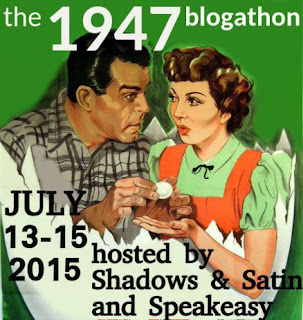 After my outing with Nick and Nora (and Asta!) yesterday, I'm really enjoying this 1947 Blogathon. For the other marvelous discussions, click here and don't look back. If you missed my previous entry for the blogathon, you can find it here . But at this moment, let's jump in the pool with my favorite mermaid... On stage at a ritzy theater, opera star Richard Herald performs as his proud son, Dick Johnson, looks on in the audience. Sitting by Dick is his snooty fiancee, Frances Allenbury, and her mother, both of whom seem to only want the marriage because it will link them to the prestigious Richard Herald. Richard is thrilled to have his son back home after service in the army, and immediately starts pushing an opera career on the boy. Dick loves singing and he loves his father, but opera just isn't right for him, something that doesn't register with his father or his fiancee. Noticing a newspaper advertisement for Leonora Cambaretti's (Williams) Aqu
6 comments
Continue » 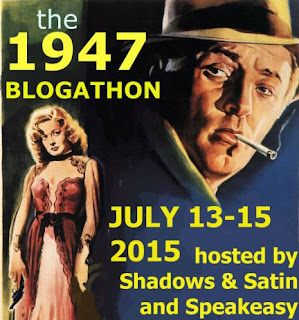 This post is part of the wonderful 1947 Blogathon, which covers many of the fabulous films from that year. Click here to check out the many other fun entries! You'll be surprised at how many great works appeared in 1947. Be sure to check in tomorrow, the 14th, for my second entry in the blogathon. I had such a hard time choosing which movies to cover, I just had to do two posts, so we'll be swimming around with Esther Williams and Jimmy Durante tomorrow. For now, though, let's have a ball with the incomparable Charles family... Instead of doing my usual plot details, I thought I would try something different. A lot of people seem to malign the Thin Man series after the first two entries, something I just can't agree with. Admittedly, I'll watch anything with William Powell and Myrna Loy, especially if they're together -- if there was ever a pairing that could carry a film with simply their chemistry, I'd bet it was Powell and Loy. W.S. Van Dyke II w
13 comments
Continue » 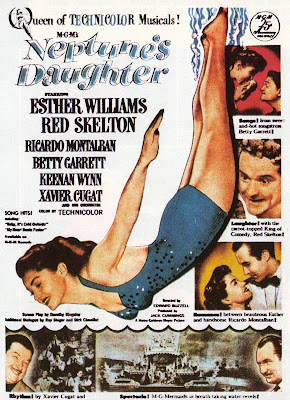 Stop it, guys, you're making me blush. Less than a month ago, I was nominated for the Liebster by the terrific Leah at Cary Grant Won't Eat You , and today I found myself nominated again by Steve over at the great Movie Movie Blog Blog . I'm truly very thrilled. If you haven't heard of the Liebster Award before, the rules are that to accept it, I must answer my nominator's 11 questions, nominate up to 11 bloggers, ask 11 of my own for my nominees to answer, and I have to provide 11 things about myself. Steve's Questions: 1. “All-time favorite movie” is too tough. What is your favorite genre, and what is your all-time favorite movie in that genre? It's a tie between comedies and musicals. My favorite comedy is Some Like It Hot, without a doubt. It's way too funny for its own good. Naming my favorite musical is apt to keep me awake for nights on end, so I'll just answer one that is definitely in my top 5: Follow the Fleet, with the inimitable
7 comments
Continue » 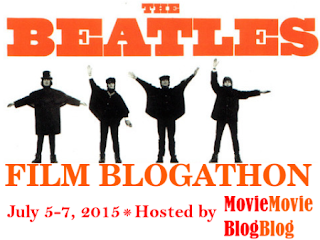 This post is my contribution to the fun Beatles Film Blogathon hosted by Steve over at Movie Movie Blog Blog. To read the other entries, click here . For the benefit of Mr. Kite, please do. ___________________________________ Ever since I can remember, I've been aware of the Beatles. The amazing thing is I think almost everyone can say that. I didn't really appreciate them until one summer I listened to a Greatest Hits cassette tape that was my dad's, a tape that I played over and over until the stereo I used went kaput. And then a great thing happened to me: I took a class last semester on the history of 1960's rock music. I thought I knew the Beatles, knew their songs, appreciated them. Uh, no. Not even close. After discussing the band in class for two weeks, I immediately bought all but two of their albums and I knew I was in love. But before I could worship the Beatles for their more-than-impressive catalog and cooler-than-cool image, my mom introduced my
41 comments
Continue » 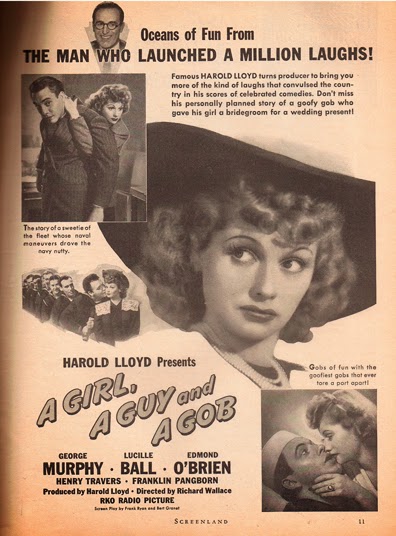 Lucille Ball is one of my favorite actresses, although at this point, you're probably wondering "Who isn't your favorite?" Anyway, I'm such a fan of the glorious Ms. Ball, it's a guarantee that I will watch anything she was a part of, especially her films. She may not have thought they were much to write home about, mainly because she was the "Queen of the B's," but even if I don't like the material, I always adore her performance. Recently I caught the charming comedy A Girl, a Guy, and a Gob on TCM and I was so pleasantly surprised, I knew I should share it with you all. We open at the Civic Opera House. A well-dressed man, his date, and his date's mother arrive, but they're stuck at the door while the man searches for their tickets. The man is shipping magnate Stephen Herrick (Edmond O'Brien), and he's much too meek to inform the usher that he has had the same opera box for five years and he should be directed to
4 comments
Continue »
More posts