Showing posts from January, 2018
Show all

The Mermaid and the Madman 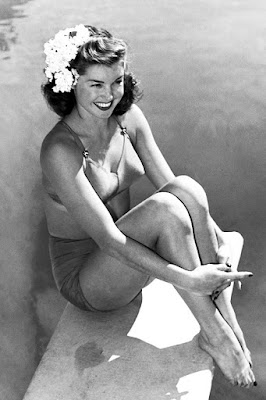 In 1941, a pretty, young sales clerk went to the movies with her new husband to see the MGM extravaganza Ziegfeld Girl . As they sat in the dark, the man was not particularly impressed, but his wife was entranced. She was beguiled by the impossible glamour of Lana Turner and Hedy Lamarr; Judy Garland's beautiful, trembling rendition of "I'm Always Chasing Rainbows;" and the unforgettable musical numbers directed by Busby Berkeley. What made the experience even more overwhelming was that this woman -- a champion swimmer, a former Olympic hopeful, and now an I. Magnin salesgirl -- was being courted by MGM at that very moment. Esther Williams didn't have stars in her eyes when it came to Hollywood. After swimming in Billy Rose's Aquacade alongside Johnny Weissmuller and witnessing the seedy side of show business firsthand, Esther wasn't enthusiastic when MGM initially came calling. But then she had second thoughts, thoughts that were only intensified whe
9 comments
Continue » 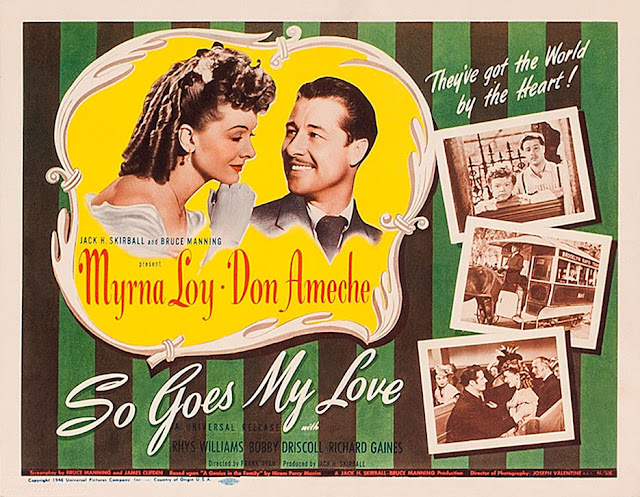 When you're a classic film fan, there is always that fear that you'll no longer find new favorites. It's irrational, we know, but there were only so many old movies made and when you devour as many as you can week after week, you start to wonder if all of those precious "new" discoveries are behind you. Will you ever watch another film that will inspire you to watch it countless times like you have with Bringing Up Baby or Bathing Beauty ? It was during one of these ruts when I came upon So Goes My Love , a charming comedy that made my heart flutter instantly just because it starred two of my absolute favorites, Don Ameche and Myrna Loy. Based on A Genius in the Family , the memoir of Hiram Percy Maxim, So Goes My Love concentrates on his parents, Jane Budden and inventor Hiram Stevens Maxim. Maxim (the father) created the Maxim Gun, the first fully automatic, portable machine gun. He held patents on steam pumps, mousetraps, and curling irons, and he dab
6 comments
Continue »
More posts